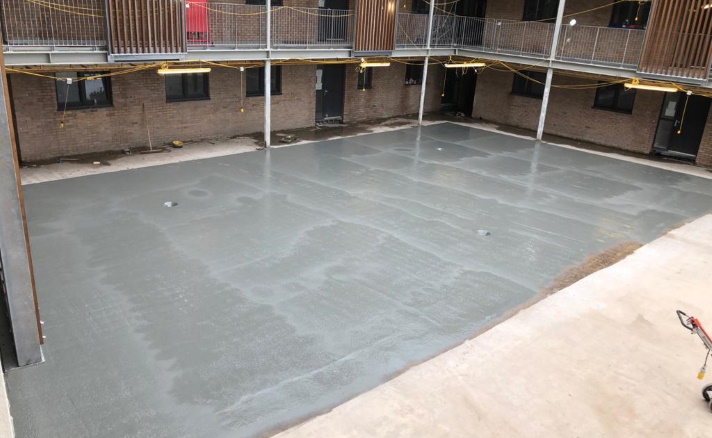 Situated at the former Leith Walk tram depot. A derelict brownfield site has been transformed into The Engine Yard, a mixed-use development comprising 377 apartments, duplexes and penthouses.

An on-going project with architect Cooper Cromar, occupier for Places for People, the overall scheme has included the construction of six new residential blocks, renovation of an existing listed building and creation of a fully-equipped fitness centre.

A juxtaposition of old and new, the properties are stylish, modern homes that draw upon Edinburgh’s traditional architecture. The scheme has replaced the original tram depot which was built in 1898 and included workshops and the engine room which housed the winding gear for the city’s trams.

Due to the need for products which were HAPAS (Highways Authority Product Approval Scheme) certified, Sika worked alongside contractor Site Sealants on the 4,280 sqm site, enabling them to transfer slab above the underground parking.

Materials used on the site needed to be robust due to their requirement to be applied on a trafficable transfer slab. Site Sealants needed high performance, reliable equipment which would give them peace of mind that the job would run smoothly and therefore Sika was selected.

Once the substrate was prepared, the products were spray-applied.

They were complemented with the Sikadur®- Combiflex® SG System, used for waterproofing detail around block perimeters. Designed for sealing connection joints and cracks, these products allow for possible movement while retaining watertight qualities.

“Sika products have never let us down and on this project of high importance they truly helped us complete the task in a swift manner without any problems.
We will continue to turn to Sika products for future projects and the team has been a pleasure to work with throughout; providing expertise and advice when needed, enabling us to work seamlessly on The Engine Yard transformation.
”