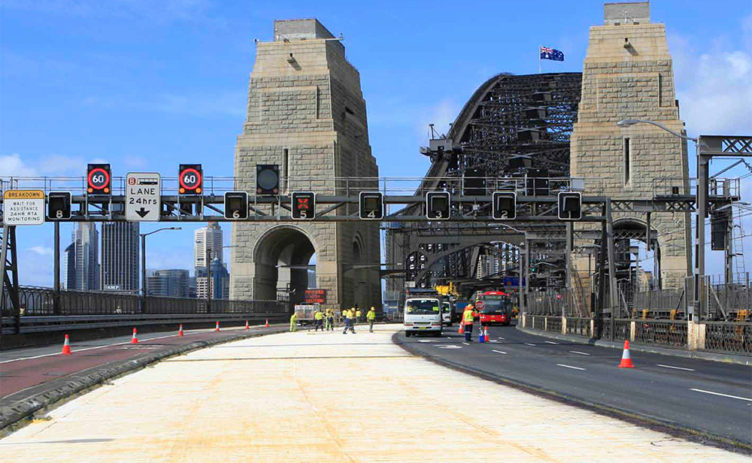 The iconic Sydney Harbour Bridge has undergone major road maintenance. Completed ahead of the structure’s 80th anniversary on March 19, the works involved the application of a unique waterproofing system from Sika in very challenging weather conditions.

The project aimed to prevent rainwater damaging the structural elements of the bridge, including the concrete bridge deck and steel support structure. Sika partnered with an experienced contractor to ensure the waterproofing application was delivered within a very tight schedule, minimising service downtime on this high traffic roadway.

Works included resurfacing and replacement of its original and now 80 year old waterproofing system. NSW Roads Maritime Services (RMS), the regional authority in charge of the bridge, started an investigation to find possible solutions to preserve and upgrade this Sydney icon. The requirements of the waterproofing system were clearly defined including adhesion, tensile and flexural testing as well as cyclic performance.

The main target was to select a system that could handle the movements of the structure, provide crack-bridging capabilities, and reduce the risk of corrosion and structural damage on the bridge deck and the steel structure. Because of the high traffic loads, the off-service-time of the bridge had to be reduced to a minimum for the installation of the waterproofing system, and the necessity for future repairs was to be minimized. In addition, the new asphalt resurfacing was to provide a smoother and more durable surface to reduce road noise.

Sika Concrete primer and Sikalastic®-841 ST polyuria spray Utilising a fast curing and hard wearing product combination, the Sika waterproofing system was lab tested and trialled on approx. 500 square metres eight months prior to the final application on approx. 11.000 m². The process involved Sika’s Concrete Primer and Sikalastic®-841 ST polyurea spray, resulting in a membrane that enables almost immediate return to service time. The membrane is specifically designed for waterproofing and anti-corrosion applications on steel, concrete and many other substrates. Broadcast into wet surface: Sikalastic®-827 HT An additional layer of an accelerated low viscosity epoxy resin, Sikafloor® -161 with hardener Sikafloor®-345 has been applied as an adhesive for the final layer, Sikalastic®-827 HT pellets, which where broadcasted into the wet surface to create a strong bond between the liquid applied membrane and asphalt concrete.

As initially planned it was possible to cover a surface of approximately 5,000 m² of exposed concrete with the advanced and fast curing waterproofing system during one weekend. Because of the fast curing primer and membrane, even rain showers during the execution of the work did not create any difficulties. The concrete surface could be dried by heaters, and the work continued. The application was executed in the most effective like an assembly to assure the system was applied and completed one area after another to minimize the risk of contamination between layers. This way of application on the construction site was made possible only through the quick curing nature of the system layers by Sika.

We use Google Analytics to see how people use our website, this helps us to improve our content and provide a better experience for you. To find out more about the cookies we use and what they do you can read our cookie policy