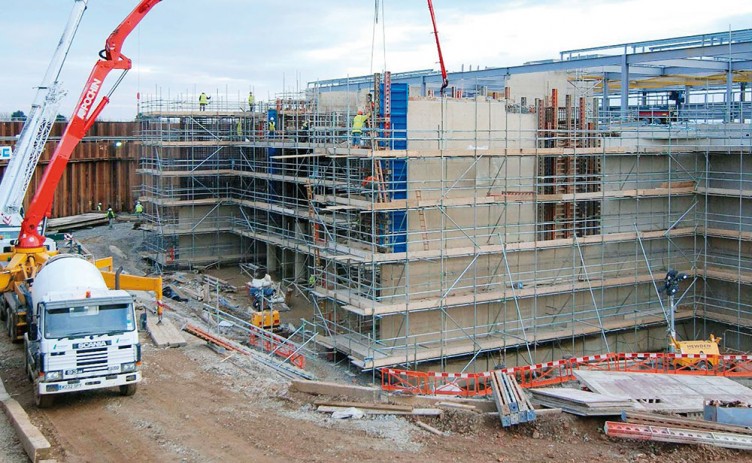 Sika Watertight Concrete is being used to build the floor slab that separates the wet volutes from the dry plant rooms, in the pump hall at the new £38 million St Germans pumping station, currently being constructed by Main Contractor, Costain at Wiggenhall St Germans in Norfolk. The land drainage and flood risk management pumping station, the UK’s largest, spans the middle level main drain, pumping land drainage and floodwaters into the tidal River Great Ouse.

The new pumping station replaces the 75 year old existing facility which provides flood protection to over 24,000 residential properties and 70,000 hectares of agricultural land, with a total value to the nation of £3.6 billion. Rising tidal levels coupled with the effects of climate change, plus the old facility coming to the end of its serviceable life, meant that a new pumping station with a higher capacity was needed. The new pumping station scheme, which was commissioned by the Middle Level Commissioners, managers of the drainage network, is being constructed inside a cofferdam 200 metres downstream from its predecessor. Able to pump up to 100 tonnes of water per second, it will have over 40% more capacity than the old facility.

One of the many engineering obstacles that had to be overcome was how to waterproof the structure in a simple and effective manner, which in turn would not delay or hinder an already congested construction schedule.

The solution was to incorporate Sika Watertight Concrete, which would eliminate the need for conventional tanking methods such as renders and membranes. Lafarge supplied the concrete from an on site batching plant.

The watertight concrete will effectively form a seal on the Volute channels, which will direct the water into and out of the pumps. A reinforced concrete structure has then been built to support the six individual pumps with six affiliated generators and fuel tanks.

Sika Watertight Concrete is based upon two powerful admixtures. Sika® Viscocrete® is a powerful superplasticiser that reduces the amount of water required in concrete production, whilst offering good workability and in turn, reducing the volume of capillary pores within the concrete. The second admixture, Sika 1+ blocks the pores to give effective protection up to 100 metres head of water. Sika Watertight Concrete is BBA approved and has a successful track record going back over 50 years.

Construction joints and other details were sealed using products from Sika’s range of jointing solutions. These range from basic hydrophilic strips to injectable hydrophilic profiles. Using the Sika Watertight Concrete system was a cost effective solution, as it saved time at both the design and construction stages of the programme by eliminating the need for external membranes and tanking systems and their inherent complex detailing and installation issues. In turn, this will give structurally integral waterproofing for the lifespan of the structure.