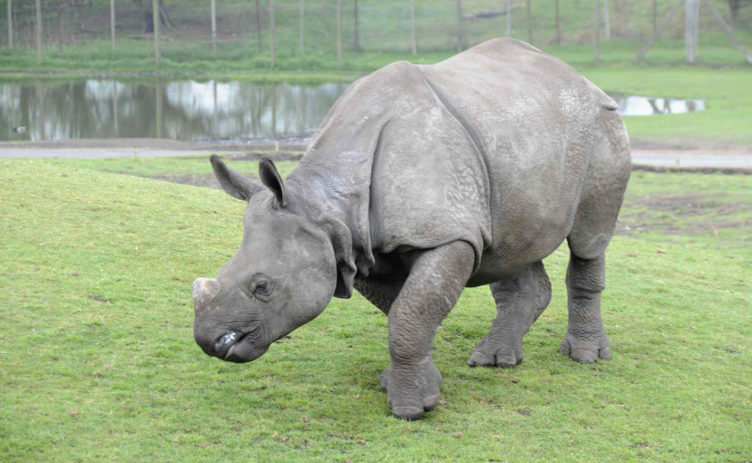 A swimming pool for rhino is probably one of the most unusual applications for Sika® Watertight Concrete, but this was the ideal solution for West Midland Safari Park’s exciting new ‘Realm of the Indian Rhino’ exhibit. A pair of Indian Rhinoceros has been introduced to the Park for the first time in its 37-year history, and to accommodate them, a £500,000 state of the art house has been built within their large free roaming enclosure.

The Rhinos have now settled down and feel completely at home in their new house, which features central heating, rubber lined floors, deep bark for sleeping and a heated indoor pool in which to plunge.

West Midland Safari Park has taken great care to imitate the natural environmental conditions within the house that the Rhino would expect in their native Indian habitat. The water temperature is kept at 18 degrees C, creating a humid atmosphere that the pair of rhino can enjoy.

The Indian Rhino is generally good-natured, with a distinctive ‘armoured’ appearance caused by the folds in its skin, and although numbers in the wild have been rising, their existence is still precarious, so introducing the pair to the Park is significant in preservation terms.

A simple, time-saving watertight solution for a rhino swimming pool.

The BBA certified Sika® Watertight Concrete system was an ideal choice for constructing the pool. It has many benefits over traditional methods of waterproofing, including simplified design coupled with time saving on site through the elimination of laborious detailing of tanking membranes. Sika® Watertight Concrete incorporates two state-of-the-art powerful Sika admixtures. These work firstly by reducing the water cement ratio, producing a highly workable concrete to aid placement and compaction, and secondly, by blocking the remaining capillary pores. The system has a successful track record going back 50 years.

Sika® Watertight Concrete is used in conjunction with the SikaSwell® jointing system, which consists of joint sealing profiles that expand on contact with water, thus ensuring the pool will remain watertight despite the robustness of its occupants.

We use Google Analytics to see how people use our website, this helps us to improve our content and provide a better experience for you. To find out more about the cookies we use and what they do you can read our cookie policy