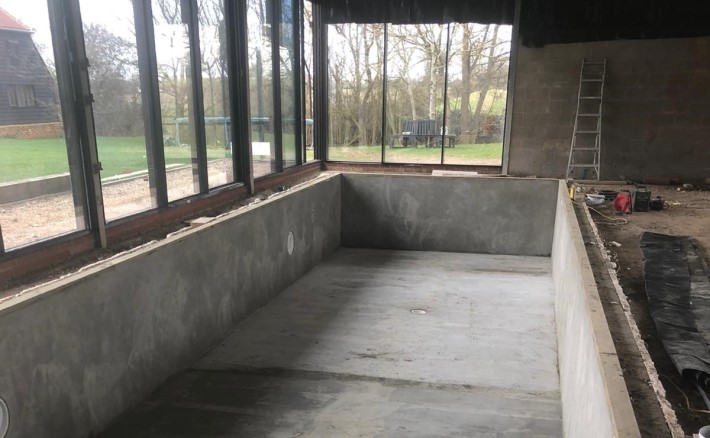 A barn conversion in Chelmsford was in need of a waterproof concrete solution which would combat the elements and provide protection for a large swimming pool housed within it.

The large, reinforced block-built swimming pool in question, was constructed on a structural concrete base as part of a resident’s estate.

The barn’s location at the bottom of a steep hill with very limited drainage meant ground water from the outside was able to enter the pool at an alarming rate.

As such, the resident turned to Renderseal Ltd, a long-standing Sika® 1 Registered Contractor, which provides waterproofing services throughout London and the Home Counties. Working together with the Sika team, Renderseal Ltd implemented a new waterproofing system which would stand the test of time for the swimming pool.

Due to the nature of the barn’s facility and its position on the road, it was important that the solution produced would provide an impermeable structure for the client.

The Sika®-1 Pre-bagged Waterproof System, which consists of a render system for use on walls and overhead surfaces, as well as a screed system for use on the floor, was specified for the project due to its proven track record and BBA certificate.

The high-performance crack and waterproofing system, Sikadur Combiflex® SG, was also utilised due to its resistance to various levels of water pressure and its high-quality seal of joints, perfect for the creation of watertight structures.

As part of the project, initial surface preparation was required that took approximately three days. The groundwork included bush hammering, jet washing and hoovering of the surfaces surrounding the pool.

A series of relief pipes were installed to produce a pre-cut temporary sump to drain excess water and allowed waterproofing on the bulk of the areas to be worked on.

Over the next few days, professionals were able to seal the remainder of the walls and Sikadur Combiflex® SG was installed around the perimeter wall and floor junction, whilst appropriate seals were completed to all service penetrations.

A coat of Sika®-1 Render Mortar was then applied to the walls, as well as a thick Sika®-1 Spritz Mortar slurry coat which was used across the floor twice. Topcoats of Sika®-1 Finishing Mortar were employed on the walls and completed to a perfectly smooth finish, ready to be tiled by the barn’s owner.

Finally, on the following day, a Sika®-1 Spritz and Bonding Mortar coat was laid onto the floor as well as a final Sika®-1 Screed Mortar coat. Ultimately, the waterproofing process took approximately eight days.

“The barn conversion project in Chelmsford is a perfect demonstration of the Sika®-1 Pre-bagged Waterproofing System, which provides a high-quality performance in a very wet environment, especially when carried out by an experienced contractor.

On completion of the job we were left with a very happy client, who, at the beginning of the project, struggled to believe that we would be able to achieve a watertight finished pool to which he could easily apply a tiled finish.”