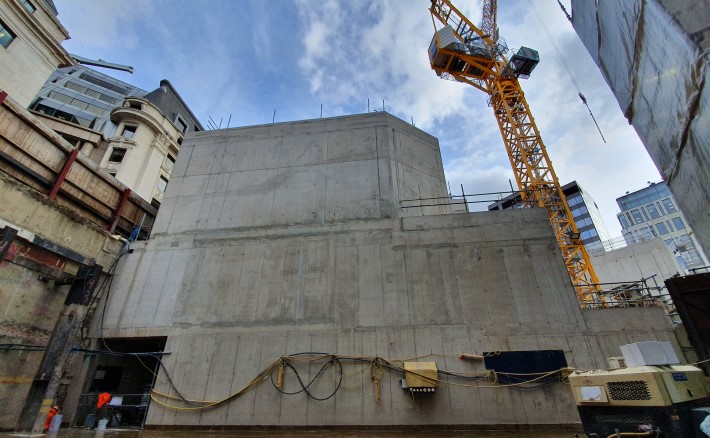 Built in 1900, London’s Bank Station provides access to the Central, Northern, DLR, Waterloo and City lines and is one of the world’s most complicated subterranean stations.

Whilst the BSCU scheme as a whole incorporated a wide range of elements – new entrance, three ticket halls, six lifts, 10 platforms, two 94m travelators and a 570m tunnel & platform for Northern Line – Sika’s involvement was on the whole block site.

Situated on King William Street, nearby to St Paul’s Cathedral, the whole block site of the BSCU project would deliver, above-ground, a new station entrance on Cannon Street. However, it’s below-ground where the intricacies of this scheme are apparent.

Delivered by main contractor, Dragados, the programme required the demolition of six buildings and subsequent excavation and piling to create the shell for the new station block.

Spanning 70 metres, the project depth was also considerable to accommodate the new infrastructure. After being appointed through an early contractor agreement, Byrne Bros appointed waterproofing specialists, Sika, to provide its expertise and ensure the design scheme was watertight.

Notwithstanding the underground location, situated in a high-trafficked area of central London, the project had to meet London Underground’s specification requirements of two types of waterproofing for any civil structure.

With a complex brief which included heavy reinforcement, structurally-sound walls complete with a drainage channels, re-injectable hoses at the start of escalator barrels and installation through piles, Sika worked closely with the design team to plan bespoke details to work with every scenario the site posed.

The vast scheme included more than 30 different detail challenges to overcome; from waterproofing atop and around piles to sealing junctions at street level; not to mention the walls, floors, lifts and stair shafts.

Products specified for the scheme included:

Tendered in 2010, the brief was to enhance passenger capacity, provide wheelchair access to the Northern Line and DLR and reduce amount of time for mass egress.

Demolition, extensive excavation, piling and creation of the reinforced concrete frame was delivered between August 2017 and November 2019. Following that, the internal fit out, wall screeding and MEP began.

The BSCU project is scheduled for completion in 2022.

“We had to have absolute confidence in our waterproofing partner to provide the best product and specification, especially as we needed some unique solutions for challenging locations.

It took two months of workshops to arrive at the final detail and we were completely reassured by the level of input from Sika. Not only were they directly involved with the design, but they came to site regularly to check installations were as per the brief. And this, combined with worldwide technical capabilities and the 20-year product warranty gave us complete confidence.
”